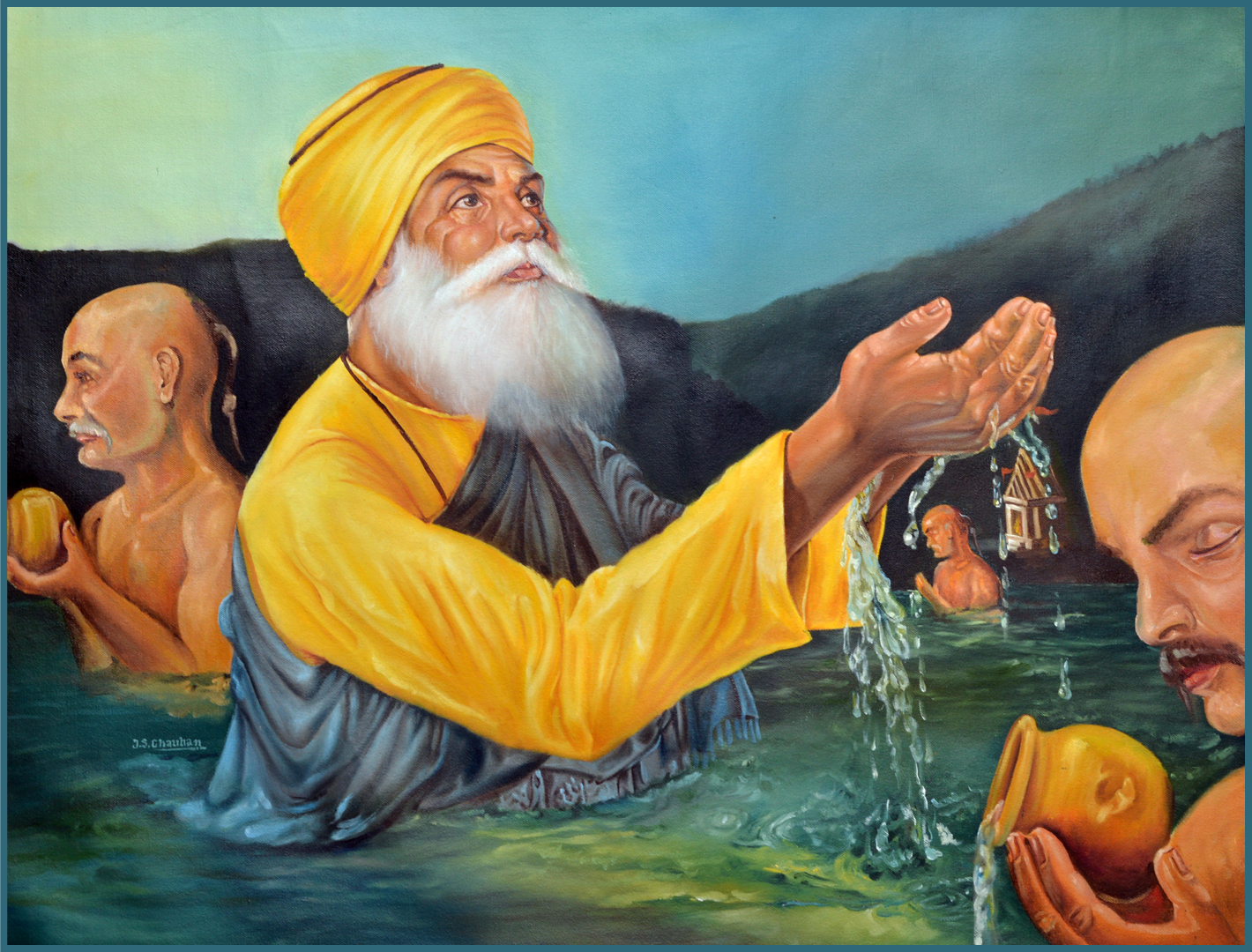 On the day of the Full Moon of Kartik, in 1469, Guru Baba Nanak Dev ji, one of the world’s biggest spiritual leaders was born in Rai Bhoi ki Talwandi (now in Pakistan). He offered a path of oneness, equality, and peace for his followers to walk upon. Born to Mehta Kalu ji a land revenue accountant and Mata Tripta ji, Guru Nanak also had an elder sister called Bibi Nanki ji.

As a young child, Nanak astounded many with his intelligence and his inclinations towards divine and philosophical topics. He lived with the same principles he preached. In his journey across Asia and the Middle East he spoke to people about the power of humanity and oneness. In
fact, it is said that when he was asked whether he is Muslim or Hindu, he would smile and say he is a human first.

In the 14th century the world was a lot like it is today with people being killed in the name of religion, and racial and social discrimination.  Politically, socially and economically there was a lot of unrest in the country. This was a time when women had no active participation in society and practices like “Sati” were still being practiced.

Guru Nanak ji’s teachings are as relevant today as they were back in his time. His aim was always to bring about harmony and he encouraged people of all faiths to coexist peacefully. His teachings also had profound social implications. He denounced the caste system prevalent in Hinduism and spoke of the irrelevance of priests and rituals. Guru Nanak always asked people to work on their inner spiritual awakening. Even though his teachings were influenced by Hinduism and Sufism, Guru Nanak ji always preached that God is one and formless. It was never his aim to start a new religion, but he ultimately became the founder of Sikhism.

Let us look at some of Guru Nanak ji’s teachings:

Serve the poor and needy:
Our Guru was given 20 rupees by his father Mehta Kalu ji to trade with but he spent it on feeding some hungry priests he found on the way to town. And when asked, he said there no no greater trade than helping the needy.

God is one and is omnipresent:
In Sultanpur Lodhi, the first words he sermonized after attaining enlightenment were:
“There is but One God, his name is the creator, he fears none, he is without hate, he never dies, he is beyond the cycle of births and death, he is self-illuminated, he is realized by the kindness of the True Guru. He was true in the beginning, he was true when the ages commenced and has ever been, he is also true now” – Japji Sahib.

Be a Human First:
Guru Nanak ji believed in the importance of humanity, over any religious alliance. Belonging to a certain religion does not make anyone a good man or woman, nor does it guarantee a place in the heavens. He said:

“When a man wants to become a Hindu, they put a thread of cotton around his neck. But if, after this, his actions are not good, his bathing and washing are useless. The Muslims praise their own creed. “Believe in the ‘Pir’ or you won’t see God,” they say. But only a few act upon the words of the ‘Pir’. Their actions will speak in God’s court. Without good deeds, none will find the way. Very few speak the truth of all truths. Nanak, for them, there will be no tests.” “Castes are folly, names are folly. All creatures have one shelter, that of God. If a man calls himself good, the truth shall be known O Nanak, when his actions are accounted or, under the Guru’s instruction regard all men as equal, since God’s light is contained in every heart.”

Be a warrior with reasoning:
Guru Nanak Sahib Ji was a great warrior, who never fought with a sword but with great reasoning. No matter where he went or whom he met, be it the Sidhs, Kazis, Mullahs or Pandits, Guru ji satisfied them with his great logic and reasoning and condemned their useless rituals and superstitions.

There is an interesting story about when Guru Sahib Ji stopped at Haridwar a famous Hindu pilgrimage center on the Ganges, where he found large gatherings of devotees who were having ritual baths in the holy river and offering water to the sun. And when Guru ji asked about it,
the Pandits said they are offering water to their ancestors. Then Guru ji started throwing water in the opposite direction towards the west. When asked by pilgrims, Guru said, “I am sending water to my dry farms in Punjab”. They laughed and asked him how the water will reach his farms which are so far away? And Guru ji said with a smile, “if your water can reach your ancestors in the region of Sun which is millions of miles away from here, why can’t mine reach my fields a short distance away from here”. The pilgrims realized their folly and fell at the Gurus feet.

Equality, brotherhood and racial harmony:
Guru Nanak Dev ji denounced the caste system and taught that everyone is equal, regardless of caste, creed or gender. He is the first spiritual master who contributed to women’s empowerment and their rights. Guru Nanak appealed to his followers to respect women and to treat them as their equals. When women were not allowed to enter temples and pray in mosques, he opened the doors and permitted them to pray like everyone else. He said a man is always bound to a women and that without women there would be no creation on earth. To give women respect and full rights, he used to say “why call ‘her’ inferior? From her, the Kings are born”.

He also preached that God is not for the rich to practice, and it is everyone’s right to have faith and practice. The most famous teachings attributed to Guru Nanak are that there is only one God, and that all human beings can have direct access to God with no need of rituals or priests.

Guru Nanak Dev ji spent many years of his life with his childhood friend Bhai Mardana ji who was a great Rabab player and had great  knowledge of the Ragas. Whenever Guru ji meditated he used to say “Chal Mardaneya Vaja Rabab, Bani Ayi” (Oh dear Mardana, play Rabab, Bani of His word emanated from the primal Lord). He was often Guruji’s companion while traveling. Even though Bhai Mardana followed Islam, Guru Ji kept him along with his journey to show others that we all are one despiet the caste and religious difference.

No one is inferior or superior:
When Guru ji reached Mecca, the contemporaneous religious leaders gathered around Guru Nanak Dev ji and asked if Hindus are superior or Muslims. Then Guru ji uttered with a smile on his face “Without good deeds, none will find the way. Only your pure intentions and deeds will be counted in the almighty’s court”.

How to live peacefully and enjoy Oneness:
To avoid the pitfalls of the “Ego” Nanak encouraged everyone to follow a Guru – someone who could lead seekers with the right teachings. By following the teachings of a Guru, people can cultivate a spiritual attitude of devotion and discipline and practice the following:

Salvation is in Family:
Guru Nanak Ji also restored people’s faith in God by saying that the Creator is deeply involved in what man is trying to achieve on earth. While most other religions including sects of Hinduism and Buddhism advocated monasticism in order to achieve salvation, Guru Nanak came up with a way of life that supported the average householder.

Most importantly, he also taught his followers the methods to attain salvation while leading a normal life within the society. He stressed on the importance of leading one’s life with family. Not only did he teach his ideals, but he also served as a living example. Guru ji, also taught by example to always work hard and to not depend on others for one’s work. He himself, ploughed the fields of Kartarpur Sahib during his last years.

Choose the Deserving:
In 1539 Guru Nanak ji left for the heavenly abode,and was followed by nine other Gurus who followed his teachings and continued to spread his message. When choosing his successor, Guru Nanak did not favor any of his sons, instead chose Bhai Lehna ji (renamed Guru Angad Dev ji), to be his rightful successor. Guru Angad Dev ji was chosen because of his dedication and service to humanity.

His golden teachings are still applicable today as they were in the past and will always continue to serve humanity.

Guru Nanak ji always dreamt of a just, harmonious and inclusive society for all and hopefully we will be able to achieve that some day.