Guru Nanak Dev Ji, the founder and the first Guru of Sikhs was born on the full moon of the Kaartik month in 1469 in Rai Bhoi Di Talwandi, now in Pakistan. This year marked his 550th birth anniversary, an occasion that has been widely celebrated all across the world with great
fervor and enthusiasm.

The biggest celebration took place by Sikh Panth in Nankana Sahib in Pakistan which is the birthplace of Guru Nanak dev Ji, and at Sultanpur Lodhi in India where he lived and worked, and is said to have received his enlightenment.

Guru Nanak Sahib’s birthday was celebrated in various ways here in Hong Kong by his followers and the Khalsa Diwan (The Sikh Gurdwara in Hong Kong). These are some of the events and ceremonies that took place around the city to mark this blessed day:

Seminar on the teachings of Guru Nanak Dev Ji
A seminar was organized on the 25th Oct 2019, for which various leaders of political parties in HK, officials from the Indian consulate, selected Indian and religious organizations were invited. Special speakers from India (Dr. Inderjit Singh Gogoani, and Bhai Hanwant Singh -PTC Anchor) and Bhai Sukha Singh from the UK spoke to shed light on the life and teachings of Guru Nanak Dev Ji. Following the lectures, the Sikh martial arts called Gatka was performed superbly by the local Nihang Gursikhs. One of the most enjoyable parts of the evening was a wonderful play called “Aar Nanak Paar Nanak” which was performed by little children.

Nagar Kirtan and BirthdayCelebrations
With echoes of hymns in the air, and music played by an army band, members of the community took part in the Nagar Kirtan (a Sikh custom involving the processional singing of holy hymns throughout a community). Led by the Panj Pyara Sahib ( the five beloved sons or leaders), the Guru Granth Sahib (Holy book of Sikhs) was carried by devotees in a beautiful golden Palki. Walking around Happy Valley, with music, and Sikh martial arts performances, the Nagar Kirtan was carried out wonderfully by the devotees, and as per tradition followed by a Langar.

Indian Consulate Celebrations
Our Indian consulate did not hold back in their celebrations for Guru Nanki Ji’s 550 birthday anniversary. The day began with the “Jap Ji Sahib Prayer” -the first sacred composition by Guru Nanak Dev Ji, followed by Kirtan. The consulate also organized their own tree plantation drive along with other members of the community, to deliver the message for a greener environment for all. 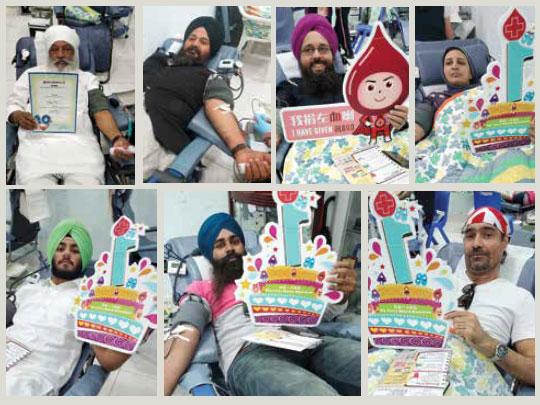 Blood Transfusion Camp
As Guru Nanak sahib always emphasized on humanity first before anything else, to honour his teachings the Khalsa Diwan organized a blood
transfusion camp with the help of the Hong Kong Red Cross Society under the name “Blood Has No Religion”. Members from different parts of the community here in Hong Kong donated their blood. When we spoke with Mr. Jagjeet Singh Chohla Sahib (Gurdwara representative) about the drive, he told us that their target was to collect blood donations from 550 donors to honour the 550th birthday celebration of Guru Nanak Sahib. He also thanked the community for the overwhelming response as people despite their caste, creed or religion came forward to donate.

Tree Plantation Drive
Guru Nanak Dev Ji teachings spoke a lot about human beings having an “inner world” and an “outer world”. For our inner world, he asked his followers to control and conquer our own minds and said: “we conquer our mind we conquer the world”. For the outer world, Guru Nanak Dev Ji says ‘Air is our Guru, water is our father, the earth is our mother. They give us life, we sleep in their laps night and day, so we should not spoil them.” Keeping these teachings in mind, the Khalsa Diwan Sikh Temple organized a tree plantation drive in which Sikh Volunteers planted 550 trees to commemorate the 550th birthday.

Hindu Temple TST
The temple organized three days of prayer and Kirtan. A special group of hymns singers were invited from India to perform our Guru’s Sacred compositions. A large number of followers and devotees came over the three days to observe, enjoy and collect blessings. Not only did people around the world come together to pay a fitting tribute to one of the most regarded spiritual leaders of our time, but the happiness and positivity that could be felt amongst the Sikh devotees and people from various communities only goes to show how remarkable Guru Nanak Ji’s legacy is.