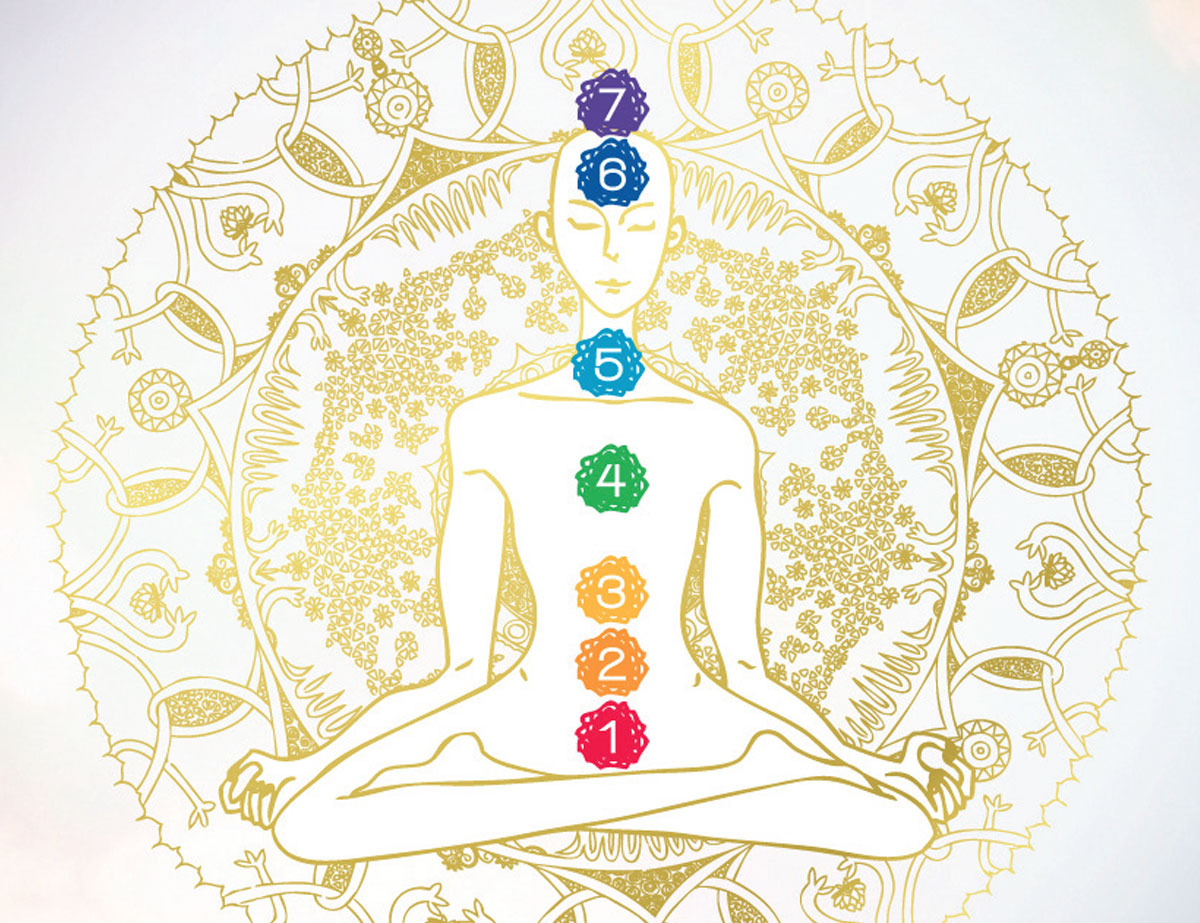 Chakras are energy bands surrounding our body governing the transfer of energy to the cells. Energy moves in and out of these circular openings in the front and back of the body. Today through the science of Kirlan photography, we can view these centre of light right where the ancients said they were.

The Mool of Chakras:
The chakras take bioenergy from the ethnic/Prana field which extends from 6 to 18 inches all around the body it stimulates the endocrine glands which control the chemical balance of the cell; It gives the nervous system the motor power to run the electrical and electronic system of our body. If they are out of balance or out of harmony, the cells will not maintain, rebuild or regenerate themselves and we become ill… Emotions are vibration; they keep the bioenergy pulsing at a rhythmic rate. Imbalanced or negative emotions cause an improper rhythm and incorrect stimulus to the gland and nervous system, they cause tension and loss of energy. Balancing the chakras allows proper flow to the cell, increasing energy and relaxing tensions. Many times, the balancing can reduce the stiffness and pains too.

Knowing the importance I would suggest everyone should know the basic knowledge of Chakras so that we are in harmony with our physical body.

The chakras have always been a part of Indian and Vedic Astrology and Karmic Upays, hence it is really important to work upon it so that one can accept and control the activities and feel the bliss internally.

Root Chakras:
Root chakras are known as Muladhara and are based on the tailbone, chanting the sound LUM can balance this chakra, its color is Red and the Associate animal with the chakra is Elephant. It controls the element EARTH and balances the MAYA (illusions). The residing energy of this chakra is GANESHA. It controls our legs n lower back, sexual organs, hips n balance our basic need of creativity and self-worth..If unbalanced we have the emotional blockages like fear anxiety.

Manipura Chakra:
Solar plexus known as manipura is located at upper abdomen, The healing sound for the Chakra is RAM, while the color of light which you can experience is yellow. The associated animal with the Chakra is Bear, element- fire, residing energy Sita-Ram. The chakra is known to balance Hosh (awareness) and control digestive systems, depression, lack of confidence and balance our self-respect and ego.

Vishuddha Chakra:
The chakra of Heart is known as Vishuddha. The chakra is based right at the centre of the chest, The enchanting healing sound for the chakra is YAM. The colour associated with it is green while associated animal with the same is antelope. element – Air. The chakra influences balances – Dharma ( basic nature) residing energy – Krishna and luxmi, controls – heart, lungs, circulatory system, shoulders, upper back and balances- centre of love, compassion n hate.

Anhatta Chakra:
The Chakra based near the lower end of Throat is ANAHATA. The healing sound is HAM while the colour associated with it is blue. The associated animal with the same is white elephant, element spac. The chakra is known to balance -Sambhoga ( enjoyment) and fertility. The residing energy- Krishna, controls – throat, blood circulation teeth, ears and thyroid gland and balances our expressions, voice, communication, colds, cough, asthma.

Agya Chakra:
Known as Third eye- Agya Chakra is. based between eyes. The rejuvenating sound reflecting it is OM, The color is violet while the associated animal with it is Eagle. The chakra is known to balance the element -ether, and balances the feeling of moksha (enlightenment) Residing energy- Shiva, control – eyes, memory anger n balance our psychic abilities, intuitions, the energy of spirit n light, answer to all the questions.

Sahasra Chakra:
The Chakra lies at the Crown generally known as Sahasara. You can feel the reflection right between the center of the head. The sound –Om is the chant which can help you to control the chakra. The color for the chakra is violet while the associated animal is butterfly. The chakra is known to control the Maha-Nirvana(Enlightment and connection with eternal bliss). The residing energy- live masters, control- faith in existence, positive – attitude and surrender balance, let go, flow with the time, awareness. No questions just acceptance.

Teachings and learnings from Dada Vaswani