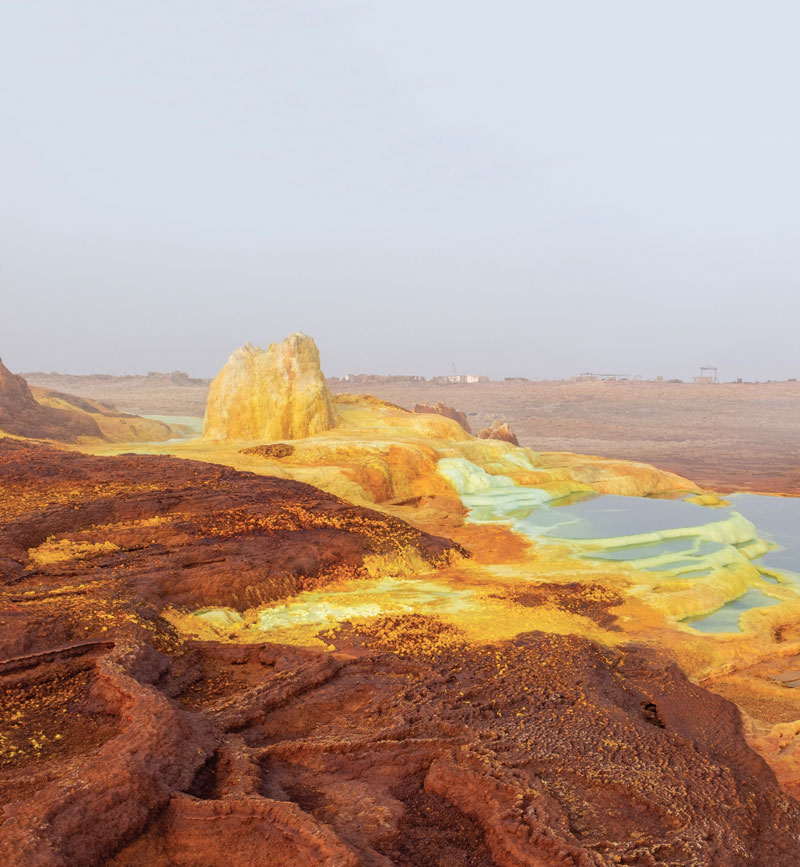 An ancient land dating back over 3 million years with culture and heritage that includes the Queen of Sheba and King Solomon, Ethiopia is home to the world’s hottest settlement. A multilingual country, it also has the largest number of UNESCO World Heritage Sites in Africa.

I have to say I was a little surprised with the response I got every time I told someone I was going on holiday to Ethiopia. “Really! But why?” was the common reaction. Having just spent 8 days there, I’m honestly wondering, “really, why not?” There are so many reasons to visit Ethiopia.

From its stunning landscape to amazing jazz bars, a chance to travel back four million years in pre-historic cities, delicious food, coffee and some of the nicest people you will ever meet.

Like most travellers going to the country, my friends and I flew into Addis Ababa, the capital and fourth-largest city in Africa. Slightly daunting because of the chaos and traffic, Addis, feels both like a city evolving rapidly with construction and infrastructure projects abound but also lost in time as cows and goats roam the streets between markets and archaic shopping malls.

Though we didn’t need to take them, altitude sickness tablets made our packing list as Addis is 2400 meters above sea level. Even higher, the sacred Entoto Mountains reach 3200 meters making them the best spot to marvel at the panoramic views of the city amidst the fresh breeze of the eucalyptus forests.

If you are a museum junkie, you will be spoilt for choice as there are no shortages of artefacts and relics on display in the museums here. Ethiopian history dates back to 10BC when the Queen of Sheba visited King Solomon of Israel, and legend has it, gave birth to Ethiopia’s first king. That imperial line lasted all the way to 1974 when descendant Haile Selassie was overthrown in a military coup.

And if time constraints mean you have to choose just one, then a visit to The National Museum is a must. Home to the legendary Lucy, the oldest and most complete female hominid ape ever discovered dating back 3.2 million years. She is known to have changed our understanding of human origins forever.

With all that history and walking around, you’ll need a coffee stop (as I certainly did), and it will be some of the finest coffee you’ll ever taste. Traditional Ethiopian coffee is painstakingly roasted by hand, ground with a mortar and pestle, and then brewed in a traditional clay coffee pot known as a jebena. Popcorn is served, and frankincense is burned to complete the ceremony.

Just in case you overdo it on the coffee and can’t sleep at night… don’t worry. Ethiojazz: a hypnotic union of traditional folk with swing and jazz, underscored with that familiar Afrobeat, is enjoying a resurgence with jazz clubs popping up all over the capital. We opted for The African Jazz Village in the basement of the historic Ghion Hotel. This is where the legend, Mulatu Astatkie used to perform and as luck would have it, he chose to stop by and jam with the boys on the night we were there.

Leaving the hustle and bustle of Addis behind us, the next day, we woke before dawn to catch a flight to Mekelle. This is the starting point for the 260km drive down to the Danakil Depression, one of the lowest points in the world. Often compared to the Grand Canyon in Arizona, the rugged landscape of soft sandstone, lava, rock and fields of teff was so beautiful that for the entire ride, we silently stared out the window, breaking our gaze only to take photos. Besides our convoy, there were hardly any other cars along the way, but we shared the newly paved asphalt road with camels and children often walking in pairs to school or herding goats, cows and donkeys.

With temperatures reaching as high as 60 degrees, the Danakil Desert is often called “hell on earth” or “the most inhospitable place in the world”. In my view, actually, it was breathtaking! All the water in Danakil evaporates leaving behind a glistening crust of salt or “white gold”. For centuries now the Afar people mine salt from this vast expanse making it the oldest trade in Africa. While water was scarce, we enjoyed a few glasses of wine at sunset, watching the colours of the sky melt into the reflection below before heading back to our camp, where we slept under the stars.

To beat the heat, we began our drive to Hawzein in the middle of the night, stopping at Dallol at sunrise. Here thanks to three diverging tectonic plates, hot springs of Sulphur, potash and other minerals bubble up into boiling pools of liquid and ethereal crystals. Walking around the surreal green, yellow and orange alien landscape, you can’t help but feel like you are on another planet.

After spending a few nights in the Tigray region, hiking up cliffs to churches built in secret caves, I ended my trip in Lalibela, Ethiopia’s crown jewel. An hour’s flight from Axum, Lalibela is named after King Lalibela who commissioned the building of 13 spectacular churches from solid rock to recreate the holy city of Jerusalem. It’s truly an impossible feat with the most prominent church, Bet Medhane Alem, measuring 8000 square feet and the most incredible, Bet Giyorgis or St George’s Church, carved in the form of a cross.

Ethiopia is astonishing! It is a country that leaves you speechless with its natural beauty, distinctive cuisine and ethnically diverse culture. I really can’t understand why all the “Instagrammers” are missing out on one of the most “instagrammable” places in the world. Though I guess, part of Ethiopia’s charm is how untouched it is because of the lack of tourists.

My advice…plan a trip soon before the secret is out and everyone decides to go there!