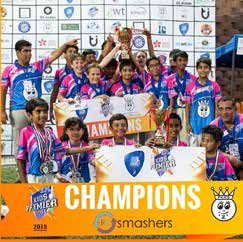 SaileshChandiramani has been all smiles in the past few weeks, and understandably so. The Hong Kong-based foreign exchange trader is one of the owners of Ria Smashers, which made a clean sweep of the hard and soft-ball competitions at the Kids Premier League 2019 held in Hong Kong. It was a grand finale and an apt conclusion to high-octane cricket from everyone involved, particularly in the searing, energy-sapping heat as the temperatures hovered in the mid-30s and the astro turf added a couple of more degrees. Despite the tough conditions and a demanding schedule over the two days of May 18 and 19, the tournament concluded successfully achieving a number of firsts.

“KPL 2019 was a runaway success and achieved several milestones. We took the competition to a completely different level in terms of the scale and profile and have set a new benchmark for ourselves,” said tournament director Tanmay Bijur, who was tasked with the overall responsibility of putting together the event. Months of planning and preparation went into the event, which marked the first time it was broadcast live on YouTube and scoring maintained in real-time. The brainchild of Ankur Vasishta, KPL’s fourth edition surpassed the previous three versions in successful execution and organisation.

Vasishta’s reliance on Bijur and a team of like-minded and passionate cricket lovers that made up the organising committee helped pull off what was a daunting task.

Cricket Hong Kong, the governing body in the territory, granted recognition to the competition, in what could be a major step in making KPL an annual fixture on the circuit and proving a stepping stone for kids interested in the game.

A record total of 120 kids participated with great enthusiasm and competitive spirit. Boys and girls aged seven to 17 years old and of different nationalities, including a couple of them of Chinese and Vietnamese origins, showed off their skills.

This time the tournament had a charitable connection too. Spectators (mainly parents who had turned up to support their kids) contributed generously to raise more than Rs80,000 (US$1,150) for Shvan Development Foundation, a non-government organisation based in New Delhi, India, that specialises in the care of stray dogs.

The tournament saw six teams each competing in the hard and soft-ball formats. The quality of cricket was outstanding with batsmen tonking the ball over the boundary for a record number of sixes – 137 and boundaries – 168 in all.

The highlight, however, was the superlative fielding from most teams that saw many batsmen being run out through direct hits, leading chief guest and umpire of international renown Anil Chaudhary to applaud the skills and efforts with a special mention.

Ria Smashers’ journey to glory in the hard-ball competition was nothing short of a roller-coaster ride, as it started off with a good win over much-fancied opponents Lohas Legends, but lost the next one against Hong Kong United in the round-robin stage.

That meant all three teams in Pool A finished on two points each and under the tournament’s rules, teams finishing on equal points at the conclusion of the round-robin stage would progress to the knock-out round after taking into account the number of boundaries. Ria Smashers narrowly pipped Hong Kong United to the post, having hit two more sixes in the round-robin matches.

Having overcome the first hurdle, Ria Smashers comfortably beat Tung Chung Masters in the Eliminator and the formidable Gencor DB Smashers in Qualifier-2 (semi-final) to face Lohas Legends again in the final.

Mohammad Sardar and KarthikVenkatesh repeated their batting performances from the opening league game against Lohas Legends, scoring 25-plus each in the final to help Ria Smashers post 120 for of 11 overs. Shaurya Sharma, Sameen Dar, Venkatesh and skipper Aryan Chandiramani piled up the pressure with the ball to restrict Lohas Legends and win the tournament by 41 runs. Venkatesh deservedly won the Man of the Final for his all-round performance, including a role in a run-out, and for setting an example with his sportsman spirit.

Other notable performances included Ahan Trivedi (Player of the Tournament with 101 runs, four wickets and seven catches) and Manu Mishra for Lohas Legends, Arnav Saxena, Kapil Chakravarti and Jarvis Barr for Gencor DB Smashers,and Arjun Kapur and RomirSinghal for Tung Chung Masters. Meanwhile in the soft-ball format, Ria Smashers cruised through to glory, winning all the league games and the Cup Final. Oscar Backelandt and IshanDadlani snared two wickets each and found good support from ConorBroadley, Vivek Nair and Sakura Panckhurst to restrict Tung Chung Masters to 67 for 7 of eight overs. Backelandt and Broadley then top-scored with 18 and 16 runs respectively to make small work of the target.

Topping the batting charts in the soft-ball format were Chaitya Gandhi of Tung Chung Masters, AbhimanyuGanesan of Hong Kong United, Caleb Bisley and Oscar Le Sage Wong of India Club and ThaneermalaiKanappan of Gencor DB Smashers. Shining with the ball were Shaurya Sharma and KhushGhanshani of Hong Kong United, and Dadlani, Backelandt and Panckhurst from Ria Smashers.