Ramadan month is famous all around the world for Muslims. In this month, Muslims fast from pre-dawn to sunset and no food and drinks are allowed during the period. Fasting is important during Ramadan as it allows the community to devote themselves to their faith and come closer to Allah, or God.

Fasting is one of the Five Pillars of Islam, which form the basis of how Muslims live their lives. The other pillars are faith, prayer, charity and making the pilgrimage to the holy city of Mecca. Ramadan is also a time for spiritual reflection, prayer, doing good deeds and spending time with family and friends.

People will make a special effort to con-nect with their communities and reach out to people who need help. Ramadan is a month of intense spiritual rejuvenation and moral excellence with a heightened focus on devotion, during which Muslims spend extra time reading the Quran and performing special prayers. Those unable to fast, such as pregnant or nursing women, the sick or elderly people and children, are exempted from it.

When does Ramadan take place?

Ramadan falls during this month because this is when the holy book that’s followed by Muslims, called the Quran, was first re-vealed to Prophet Muhammad. This year, in Hong Kong it falls from 6th May 2019 to 3rd or 4th June 2019, depending upon the sighting of the moon for the next lunar month – Shawwal – to end the marking of Ramadan and celebrating Eid al-Fitr.

Ramadan is the 9th month of the Islamic calendar, which is based on a 12 month lunar year of approximately 354 days.Because the lunar year is 11 days shorter than the solar year, each lunar month moves 11 days earlier each year.The Length and Purpose of Fasting Muslims fast from pre-dawn to sunset,a fast of between 11-22 hours depend-ing on the time of year, for a period of 29-30 days. The fast of Ramadan entails forgoing food and drink, and if married, abstaining from sex during the fasting hours. For Muslims, Ramadan is a time to train themselves both physically and spiritually by avoiding any negative acts such as gossiping, backbiting, lying or arguing. Muslims welcome Ramadan as an opportunity for self-reflection, and spiritual improvement. Ramadan is also a highly social time as Muslims invite each other to break fast together and meet for prayers at the mosque.

All Muslims who have reached puberty are obliged to fast. However for people in situations where fasting would be a hardship, they are exempted from fasting. This includes anyone who is sick or travelling; women who are pregnant, nursing, or on their menses; or older people who are too weak or ill to fast. Anyone who is exempted must make up the fast later, except for those who cannot fast due to age or chronic illness. Instead, they can feed a poor person for every day of fasting they miss.

A Muslim family usually rises about 3:30 a.m. (HKT) before the first of dawn and eats a modest breakfast-like meal called Suhur. After the meal, the family performs the morning prayer before beginning the day. At sunset, family members break the fast with dates and water, and depending on the culture, other light foods such as soup, appetisers or fruit. This is referred to as iftar which means “breaking the fast.” After performing the sunset prayers, the family eats dinner. Inviting guests to break the fast or going to someone else’s house for iftar is very common in Ramadan.

Many mosques host daily community dinners where Muslims can break their fast together. This is a great service for students, the poor and anyone who desires a break from cooking. Almost all mosques also host a community dinner on daily basis in Hong Kong. Haleem is the featured dish in Hong Kong mosques at the time of Iftar. 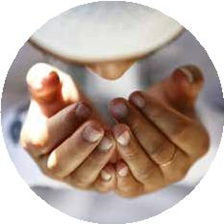 Doctors agree that fasting is extremely beneficial for low-ering cholesterol levels and for other health benefits. Fasting is a means of purify – ing the body as well as the spirit, as it gives the body a rest from the continuous task of digesting food.

Special Ramadan prayers called taraweeh are held in most mosques after the night prayer. During taraweeh, the prayer leader recites at least one thirtieth of the Quran so that by the end of the month the entire Quran would have been recited.

Since Ramadan is a time for Muslims to be especially charitable and fasting helps Muslims feel compassion for the hungry and less fortunate, many mosques hold food drives or fundraisers for charity during Ramadan. Many mosques also host open houses for their friends and neighbours of other faiths to join them for their fast-breaking dinner or iftar at the end of the fasting day.

Breaking the fast with dates is the only strictly traditional culinary custom associated with Ramadan but it is very common in Hong Kong for South Asian Muslims to have Haleem and Samosas as well. It is interesting to note the suitability of dates for this purpose as they are a concentrated source of energy and easily digestible. Different Muslim-populated countries have a variety of special dishes and desserts for Ramadan.

Where to have Fasting experience?

Many Muslims and mosques host open houses for their friends and neighbours of other faiths to join them for their fast-breaking dinner or iftar at the end of the fasting day. The biggest community dinner is held at Kowloon Mosque and Islamic Centre in Hong Kong, along with all other mosques and Muslim worship places called Madrassah.

At the end of Ramadan, Muslims celebrate one of their major holidays called Eid al-Fitr or the “Festival of the Breaking of the Fast.” Children traditionally receive new clothes, money or gifts from parents, relatives and friends. A special prayer and sermon are held the morning of Eid day, followed by a community celebration usually in a park or large hall. Food, games and presents for children are important parts of the festivities, as friends and family spend the day socialising, eating and reuniting with old acquaintances.