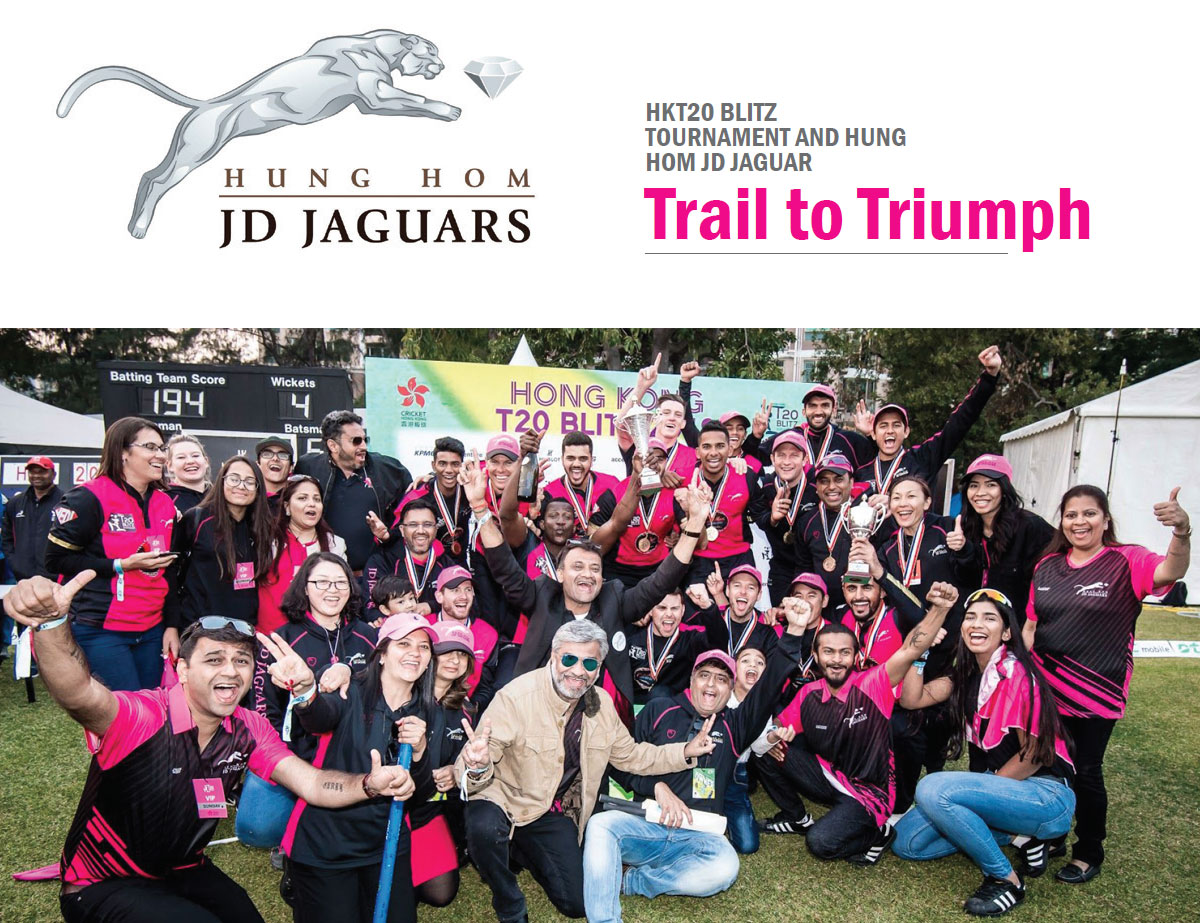 The Hong Kong T20 Blitz, a franchised league cricket tournament modeled along the lines of Indian Premier League, Big Bash League and countless others, has been pushing its boundaries of progress. 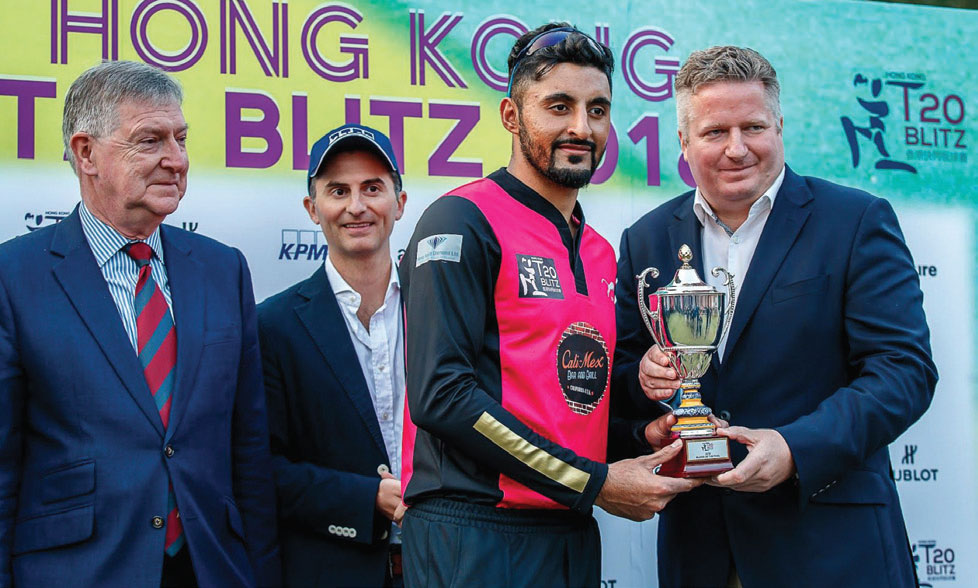 When the Blitz started in 2016, it started with humble beginnings as a 2-day event comprising of four teams, and that too was largely rained off. Three years later, the tournament has grown into a fiveteam, six-day spectacle that attracts international media and public attention, as well as sponsorship from global brands like KPMG and Hublot. 150 million viewers across the globe tuned into the tournament live, as they saw Hung Hom JD Jaguars leap to tournament triumph in the third edition. 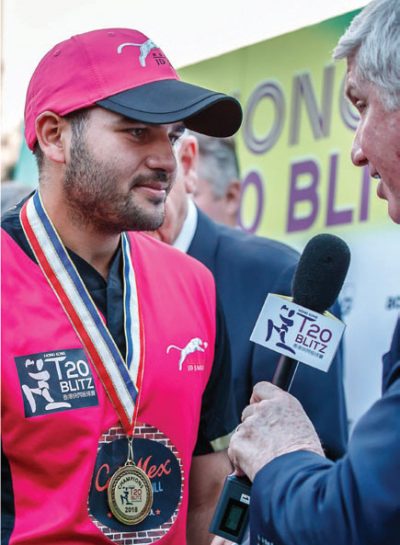 Hung Hom JD Jaguars’ track to triumph seemed rather seamless at first. Some regarded them as pre-tournament favourites, while others, the dark horses. They proved their mettle from the very onset, as they comfortably emerged victorious against the two finalists of the previous season’s tournament. Playing City Kaitak in the tournament opener, Hung Hom JD Jaguars won the toss and elected to field first. Regular wickets and tight bowling from local spinner Nadeem Ahmed and Australian paceman Ben Laughlin helped to continuously restrict the run flow of City Kaitak. The two bowlers conceded 19 runs from their four overs; the former took one wicket, while man-of-the-match Laughlin clean bowled international all-rounder Ravi Bopara as well as Aziz Khan, whose half-century helped the men in yellow reach a score of 132. In reply, Hung Hom JD Jaguars reached the target with 14 balls to spare and 6 wickets in hand, courtesy local batsman Nizakat Khan’s quickfire 48 and contributions from most of its top and middle order batsmen.

Following a day’s rest, Hung Hom JD Jaguars took on the then defending champions of the tournament, Kowloon Cantons. In a repeat of their first match, the team asked their opposition to bat first, and took two quick wickets. Kowloon Cantons then had a partnership of 126 runs, as their captain Babar Hayat and English all-rounder Samit Patel both notched up half centuries.

Hung Hom JD Jaguars were set a very respectable target of 176. Although they lost both their openers relatively quickly, Northamptonshire wicketkeeper Riki Wessels ensured there were no further hiccups as he combined with South African all-rounder Johan Botha to steer the Jaguars to victory. Wessels’ 91 off 37 balls not only made him the man-of-thematch, it also boosted the team’s net run rate significantly, as the team reached their target with 34 balls remaining and 6 wickets in hand.

This came in particularly handy, as Hung Hom JD Jaguars then faced their greatest challenge when they played Galaxy Gladiators Lantau in their third group match. Once again, Jaguars’ skipper Kinchit Shah won and opted to field against the Gladiators, led by Kumar Sangakkara. This time though, their plans and expectations were immediately thwarted as Sangakkara created an opening partnership of 87 runs in less than 8 overs.

That was not all; Sangakkara then combined with his middle order Kiwi batsman, Anton Devcich, for a partnership of 84 runs from 6 overs. After an aggregate of 13 sixes, and 17 fours, Galaxy notched up 228 runs, the highest score of the tournament history. Of course, Hung Hom JD Jaguars were under pressure from ball one, as the required rate was well over 11. Despite losing regular wickets, the team finished one shot away from victory, courtesy an onslaught by Roelof van der Merwe. To bowl the final over, the Sri Lankan legend laid his trust in local spinner Arshad Mohammad, who not only defended 228, but also ended the match with 4 wickets and was deservedly named man of the match.

As Hung Hom JD Jaguars lost their third group match by just 6 runs, they were in a must-win situation as they entered their fourth and final group match, against Hong Kong Island United. Contrary to the first three matches, Jaguars’ lost the toss and were put into bowl. Following half centuries from captain Kinchit Shah and Johan Botha, the team went on to score 187 runs for the loss of just 3 wickets off their 20 overs. Another brilliant bowling by the Jaguars ensured that Hong Kong Island United were never in the game. The highlight performer was Kyle Christie, whose man-of-the-match effort earned figures of 4/18, and ensured that Hung Hom JD Jaguars would reach the final of the Hong Kong T20 Blitz 2018.

On February 11 2018, Hung Hom JD Jaguars took on Galaxy Gladiators Lantau in the tournament final, with plenty to play for. Given their engaging duel two days prior, the expectations from the match were sky high. Galaxy Gladiators Lantau took the first point as they won the toss and inserted Jaguars to bat first. Although Gladiators’ bowler Imran Arif’s 4 wickets threaten to stall Jaguars’ progress, the men in black were guided to a total of 200, following Nizakat Khan’s 93 off 52 balls. At the innings break, opinions were equally divided and so were the engaged fans. With 201 to win, the Gladiators started off strongly, as they their openers formed a century partnership off 10 overs. Subsequently, the momentum in the second innings ebbed and flowed with every boundary and wicket. Once again, Kumar Sangakkara was the mainstay of the innings though, and he was the batsman who Jaguars were desperate to dismiss. Suddenly, Hung Hom JD Jaguars’ skipper Kinchit Shah seemed to have the midas’ touch, when he surprisingly decided to bowl an over at the most crucial juncture. Kinchit conceded only three runs, but more importantly, he earned the vital wicket of Kumar Sangakkara, who was the tournament’s leading run scorer, and later, awarded man of the tournament.

At the end of the six days, the greatest victor was the tournament itself. All the matches were streamed live on Facebook and Youtube, and they were also broadcasted by TV channels like Fox Sports, ESPN, Star Times, OSN Sports, and BT Sport. Similarly, the event was covered on international news portals such as Cricinfo and Epoch Times, as well as local news channels TVB Jade and RTHK. With such prolific coverage, one can only expect the tournament to get bigger.